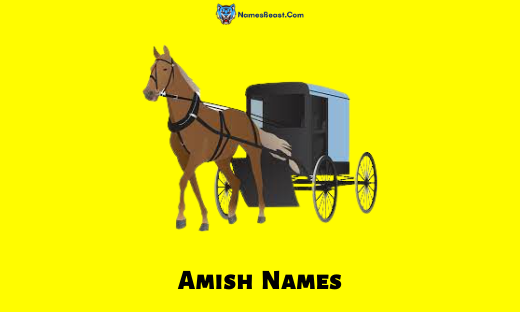 Are you looking for a perfect Amish name to give your character? Are you looking for a list of some cool Amish names? Want some help with which names to choose, and what is the right way to do so? Don’t worry. Here is the article going to help out and find answers to all the above three questions. Read the whole article, and you will find your job reduced to a few basic steps.

But before we start with the names list, let me give you some basic information on what is meant by Amish. Amish refers to a group of fellows of a traditional Christian Church who originated from Swiss German and Alsatian Anabaptism. The Amish are mainly known for their simple living life, plain dressing up, love, and pacifism from Christianity. They are found to accept modern technology with time and get too accustomed to the new methods with pace. This is because these Amish people are believers of family importance. They don’t want to give up on family time. They prefer face-to-face conversation over methods of communication. They believe in self-sufficiency and simple ways of leading a righteous life. They believe in God’s words and value the importance of rural lifestyle, human labor and effort, and humility. They say that all under living under the auspicious grace of God.

The history of Amish churches goes back to when the schisms started in a small group in Switzerland. It was when the great Jacob Ammann led the Alsatian Mennonite Anabaptists. Then the followers came to be known as Amish. During the 19th century, Amish were divided into two groups- Old order Amish and Amish Mennonites. Amish Mennonites started to accept and embrace the modern and upcoming technology and innovations while the Old order Amish continued to believe in the old traditions and culture and stayed eschew from the new innovations.

Amish fled to Pennsylvania instated there regarding favorable land offers, and as less religion, persuasion was required in the region. Between 1717 and 1750, approximately five hundred Amish migrated to Pennsylvania. The place they moved to was named Beck’s county in Pennsylvania. But later, they again moved from Beck’s county to some other place because of the new arising land issue and security concern, all because of the French and Indian war. They settled in a new place named Lancaster County. Another wave of 1500 Amish migrated during the mid 19th century and settled in areas like Ohio, Illinois, Iowa, and near southern Ontario. The latter half was mainly the Amish once who believed in a new world and innovations.

How To Choose a Perfect Name For Your Amish Fictional Character

Now that you have got your Amish names list, you must think about which one to choose and which one not to. You must be in a bug dilemma now, but let us tell you that it is not that tough as you think it to be. Here are a few steps that will make your job a lot easier if you follow. We would recommend you give some time and effort because the name you are going to give to your fictional character is your first step towards your character’s publicity. We recommend you follow all the steps listed here to have your job done as soon as possible.

These are the steps that you need to follow:

Listen To What Your Heart Is Saying

First, you should have a clear-cut picture of the kind of fictional character you want to have. Having a clear picture in your head will help your heart to give you some suggestions and pick up the best from the lot. Always know that they are the best-suited ones. Listening to heart never goes wrong. We are not telling you to compromise with logic and other reasonable factors. But you should always keep open the door of the heart to give you suggestions. This will help you to choose wisely as well as give you the satisfaction to perform other jobs related to mental satisfaction.

Try To Know Your Fictional Character

Try To Sound Good With The Name

The Amish names that you are going to choose for your fictional character should be stylish and attractive to the audience. You should choose a name that is stylish when pronounced and written. The name should be extraordinary as well as ear soothing to everyone. It should give you a good feeling about its type of fictional character when the name comes up in context. It should be attractive yet interesting enough to catch and hold you viewer’s or reader’s interest.

Try To Choose a Short Name

Besides choosing good names and giving an identity to your character, the Amish names for your fictional character should be short and crisp. You should choose a name short and compact and not something too long. This is because nowadays people tend to remember names that are short and attractive yet informative enough to hold viewers’ attention.

Reach Out To People

This article was specially made for fictional characters lovers and for those who love to try something new and different with their characters by going out of the box. We’re sure that we were of great help to you.

We hope you find this article interesting and helpful. And if you do so, please remember to share it with all your friends, family members, and others you think would be benefited from this article. Thank you—all the best to you for choosing your fictional characters’ Amish names.