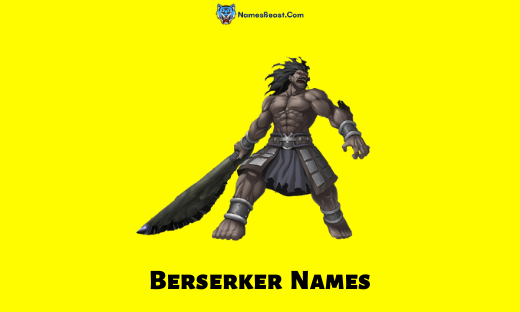 Are you looking for an attractive name for a Berserker? Well, you have come to the right place. But before taking you to the amazing list of names that we have created for a Berserker, let us give you a basic description of what actually a Berserker is.

In the pre-medieval and medieval times (specifically in German history and folklore), Berserkers were known to be warriors. They were a gang of highly devoted people to the Odin (or the supreme Norse God). They were actually the Viking warriors.

Now coming to their characteristics, Berserkers were known to fight in a quite unruly manner, so much so that their savage behaviour and animal skin clothes led to the development of the concept of werewolf all over Europe. The Berserkers did not technically have some strong weapons. All we know is that the Berserkers just used to wear either bear or wolfskin to the battle.

As mentioned earlier, Berserkers were highly devotional people who believed to gain power by performing various strong rituals. Some such rituals were spending a long time in extreme isolation, performing fast for a long time, making one get exposed to extreme heat and cold. In some cases, it has been observed that the Berserkers used to dance with a weapon prior to a fight.

It can be rightly presumed that Berserkers were more like an animal and less than a human beings. They were completely willing to adopt the ways that a wild animal had. At times, it is even known that the Berserkers lost all human sense, and when they were incomplete anger, they used to scream and howl constantly.

The way the Berserkers fight is so dangerous and horrible that stories are heard that in one fight, the Berserkers had entered, and within moments, they have shredded all the enemy soldiers to small pieces. Interestingly, the rage that these Berserkers have does not get portrayed only in the war zone. They also show it when they perform laborious tasks. It has been found that some other symptoms that the Berserkers face along with the intense rage are- shivering in the body, chattering of the teeth, and then intense chills in the body. Even their face would have swollen red with anger. Psychologically, Berserkers basically used these to motivate themselves to work harder. One such tool that they use to intensify their anger is consuming a good amount of alcohol.

Even research shows that Berserkers might have consumed a particular type of mushroom named “Amanita Muscaria,” which apparently causes hallucinations or any other psycho-physiological effects in the body. Of course, it’s just a hypothesis, and no such solid proof exists regarding whether these types of mushrooms actually existed in the world back in those days or whether Berserkers actually consumed alcohol or mushrooms before a fight or not.

How To Create A Name For A Berserker

Create Names Based On The Characteristics

The first great step regarding coming with a good name for a Berserker should be to make a name based on its characteristics. For example, we have provided to you several notable characteristics that can be seen in a Berserker. Like they do not carry any weapon during the war except wearing some animal skin. Secondly, they are obsessed with rituals, and they were known to be followers of the Odin. As per the Berserkers, Rituals gave them the power to win a war or succeed in a laborious task.

Again, another new characteristic that we are giving about a Berserker is that they were known to be invincible towards any weapon- such as swords or shields. As per a story, a certain Berserker had even consumed his own protection (which he thought gave him more power) and thereby killed six-strong enemies.

If you want to create names based on the characteristics, you must do proper and solid research on them. Make sure that the research is accurate and genuine.

For a Berserker, this becomes relevant because, firstly, we have already told you that Berserkers almost always behave like an animal- they live like them, consume foods like them, and of course, fight in the war, and do any kind of hard work like them. Secondly, it is known that the main goal of a Berserker is to convert into either a wolf or a beer. So, as you can understand, animals are a strong part in the lifestyle of a Berserker.

This goes without saying. Whatever name you choose for your Berserker, make sure that the name is a memorable one. Now how will it be so? Well, firstly, you can make words that sound easy to pronounce. This will also make the name stand out amongst the crowd. Secondly, you can identify the names which are actually memorable by taking feedbacks from your friends your parents. Make them utter the name several times and ask whether they actually feel comfortable pronouncing them and whether they can remember it.

In this way, you can come up with a good name for a Berserker.

That was it for this article. Berserkers might have a horrible amount of rage within them. But if you have that and show it while creating a name for a Berserker, trust us, you won’t be able to make an attractive name. Therefore, have a calm and content mind, and then in no minute will you be able to come with a great name for a Berserker.

Liked this article? Keep following our site, and do not forget to share this article. Thank you!