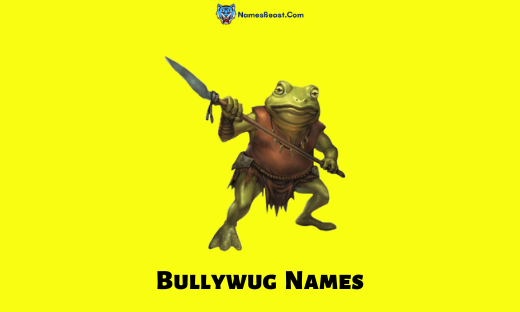 Been considering what would make an appropriate name for your Bullywug? Then you have come to the right place. In this article, you will be provided with a step-by-step guide on what and how to name your Bullywug.

Before we begin what exactly are Bullywugs, let us know its history. Bullywugs are fictional characters that probably originated from tabletop role-playing games called Dungeons and Dragons; they are a primitive race of frog-like bipedal humanoid monsters. They are found in the bogs and marshes of Toril because they need to dampen their skins from time to time. Bullywugs are the self-proclaimed lords of the swamp and live in a system of aristocracy and constantly try to be in the good books of the superiors; they move through the ranks in their groups or colonies by murdering their rivals or presenting gifts to their superiors. It’s a ritual for them to introduce themselves with grand titles. Bullywug society is divided into three ranks, the leader, the superiors, and the inferiors. Their society consists of a majority of inferiors and a few superiors.

Bullywugs are somewhere between 4 to 7 feet tall and live in tribal collectivizes in an aristocratic hierarchy; they begin their life as tadpoles just like all other species of frogs and toads and grow to maturity just after six months or so. They are expected to start working for the tribe’s army after they are one year of age. Bullywugs are considered fully mature by the age of 5 years they speak their own primordial language Bullywi, it is a language that lets Bullywugs communicate over large distances by croaking like frogs. Frogs and toads understand Bully. Bullywugs use this ability to their advantage to make gentle connections with giant frogs, which they train and often use as guardians, hunters, or mounts.

They also have a deity they owe patronage to, Ramenos. Bullywugs are giant frog men warriors who live near marshy swamps because they have a constant need to wet their skin which if they don’t, they die. They make for interesting characters and are an alternative, more awkward version of mystical creatures such as Goblins and Orcs.

It could be an exhausting and tiresome activity to come up or look for a Bullywug name all by yourself, and we are here to help with that. In this article, we will take you through a wide array of Bullywug names suiting different types of Bullywugs so that you can find the best fit for yourself. We will also include a couple of tips to help you choose the best Bullywug names for you.

Titles For Your Bullywug’s Name

Tips To Come Up With Unique Bullywug Name

If you are still wondering or confused about what to name your Bullywug, we have got your back. We have enlisted a number of tips that will help you get a better insight into naming your Bullywug.

Choose a Name That Represents Your Character

The name you choose for your character should be representative of the character you want to name. Your character’s name should be representative of the personality, importance, and gravity the character holds. For example, if your Bullywug is a very important character to the story and a lot of the plot revolves around him, it would be better to name them something that adds to the air of importance of the character. On the other hand, if your character serves other purposes such as comic relief, the name would vary in accordance with that. You will also have to consider if the gender of the Bullywug plays any role in the story.

The names will vary according to gender. Other factors include what kind of characteristics does the character display. For example, what is their specialty? Are they agile, intelligent, strong, wise, naive, or have some other capabilities. This will heavily influence what names would be most appropriate for your Bullywug.

The Simpler The Better

A Bullywug name can range from anything as simple as “Igo” to something as complicated as “King Croakabauld Ribbit the Third.” However, having a relatively more straightforward name to remember does add an advantage to the character. If you want your character to be memorable, you have to name them something that does not require a photographic memory to keep in mind.

Even though their position in the story will primarily determine the character’s name and an extremely unusual and flashy name might have its place, a good rule of thumb for most cases is to keep your character names relatively easier to remember.

Unique Names That Stand Out

At the same time, commonplace names will blend them in more with the rest. Again this might depend on what you want for your character. If you have a character that is more of a backdrop to the main events, you might not want them to stand out as much.

Choose The Correct Title To Go Along With The Name

After you have decided on a name for the Bullywug, your job is not quite finished. If you want your character to be authentic, you will have to a grand title. Traditionally Bullywugs ritually introduce themselves with their given titles, and the title tells a lot about the Bullywugs character. Please choose from the list of the title what suits your Bullywugs character best and goes along with the ring of their name. The name has to sound good with the title, too; it would be rather amusing to see a Bullywug with a majestic name associated with a menial title.

Select your titles either from the given list or make one up to suit your character the best; you can also try to switch things up and mix and match titles to come up with new original ones which might add to your Bullwugs character.

This was all you probably needed to know to develop the best-suited name for your Bullywug character. Naming your Bullywug might have seemed tricky at first, but now that you have all you need, try and unleash your creativity along with the tips from the article and come up with a name perfect for your Bullywug. If you found this article helpful, then do remember to share it with your friends, family, and peers; I hope this article attempts to help with your Bullywug naming needs.

Thank you for spending your quality time with us, and we sincerely hope our tips have been helpful enough for you. We hope to see you again next time with more interesting articles, until next time, Ciao!