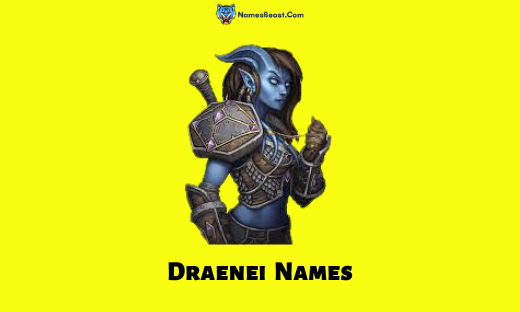 Also known as the exiled ones since they were forcefully exiled from their homeland were a powerful race of the uncorrupted year. They were plagued by the corruption of Demonic burning Legion. They traveled across universes with the prophet velen and divine naaru in search of a new safe homeland so that they can settle once again. Eventually, they were able to land on a planet they called Draner. For eons, these creatures lived in peace and harmony with their draenor’s native orcs. Everything was fine until the Burning Legion once again found them and wreaked havoc on them. Most of the Draenei were slaughtered and few were able to escape into hiding. The native orcs were corrupted by the legion who took over what was left of planet Draenor. Eventually, an exodus happened they were able to escape the planet and crash-landed on Azeroth.

These creatures are one of the main character species in the World of Warcraft games that are a big part of popular culture. People around the world have worshiped this game and spent countless hours in this game in search of perfection and satisfaction.

For centuries the Draenei have been battling the fel orcs and the demon masters. Then there was one group led by akama who claimed victory from the fierce battle. The culture of the Draenei species revolve around two things. Holy light and magic. This is why they have a unique relationship with the divine naaru. This is the sole reason why these creatures choose religious professions such as priests, mages, shamans or paladins. These people are trained to join the army of light one day and finally take down the legion. Despite all of the other things, Draenei people pursue their own lives and keep a balance between the two.

In the case of interracial relationships go these creatures have somewhat trust issues and rightly so since all their species ever faced was betrayal and slaughter. They especially hate the orcs in this context. Although there are cases of acceptance between the two factions, the factions keep a lot of grudges for each group. There have been battles between the dranei and other factions on petty things and ended in bloodshed. Despite other differences, the draenei can be found fighting alongside the blood elves against the burning legion and is one of the most beautiful things in the entire franchise. These creatures look similar to eredar of the burning legion. They also lack horns, unlike eredar.

It is safe to say that you can’t track down a decent name for your monstrosity? It is safe to say that you are befuddled? There’s no compelling reason to stress, we have you covered. These animals that once wander throughout the planet and served civilizations are presently wiped out yet they actually exist in dreams and games like World of Warcraft We have given a rundown of ways by which you can name your own beast in your #1 game or dreams like prisons and mythical serpents.

At whatever point you are beginning a game where there are characters, for example, these then you need to interface with the game at an exceptionally close to the home level that regardless of whether you are dead inside you need to remain alive outside. These will be a greater amount of a stunner for you since this game consumes your spirit. The player’s heart ought to interface with the person’s inner voice which will prompt an exceptionally natural course of naming the person as your spirit turns into your spirit.

Your conduct ascribes and your character can likewise be useful while naming your person. You can likewise get to online media to discover names as many individuals from around the world can help you name your person. They are generally clever and silly individuals out there so it’s a mutually advantageous arrangement.

Randomize The Names To Your Inclination To Improve Understanding

There are a great many choices with regard to customization. In these stages or games, players have a broad opportunity to blend and match names to their arrangement. The sexual orientation smoothness, in reality, has streamed here also so there is no requirement for male or female characters as such yet names do in any case exist. Likewise, in a world like this, the sky is the limit to remain prepared for shocks. In a pretend game like World of Warcraft. These franchises are nothing more than a money-making business but the kind of fanbases these games have is something that is unbelievable. one can think of any name however they would prefer.

Go to the web and discover names and blend and match them with different characters from different universes and make a one-of-a-kind and boss name that suits your personality. Characters from the shifted foundation are currently gotten a similar stage to battle one another as fight royale another idea of battle so its vivid and energizing.

Find a Name Which Is Short And Minimal For Simple Articulation

The name you pick will characterize you all through the game or dream. So, if its short and minimal, it will be a lot simpler for different players to articulate. Discover words and randomize them and keep a letter build up to four or five words. Then, at that point return to the first thought and cross-reference with it. You can make a rundown of 40 names just to get its fun and discover and conclude names from that point.

It’s a genuinely long interaction and it will be significantly more fun on the off chance that you do it with your loved ones. Whatever you find toward the end will be what makes you a piece of it. Interface with the game or your creative mind and a name will see you.

Find a Name That Upholds Your Draenei

If its prisons and mythical beasts, your name should uphold your person. Assuming your person is a conflict legend, the name ought to be as indicated by that and in the event that your person is a mage or a healer, the name ought to be as per that. It’s straightforward and straightforward. When you become a piece of the game then it will be not difficult to do. Naming can frequently be troublesome as a cycle yet when you begin doing it then it turns out to be simple as an interaction.

Presently a day, we can come conveniently with regards to the most common, books can likewise prove to be useful and bits of writing and movies can frequently assist with discovering names.

A name that affects the game’s circumstances is something that you should search for. Discover things that have a gravity over you and attempt to discover names from that point. The choice of the web is likewise accessible so go all out on this. Discover things that you care about and attempt to join that thought into your naming expertise. It’s astonishing how the entire cycle is only for this game. However, it’s fun toward the end. It keeps you occupied and all and is astounding to invest energy with companions.

We expect that you will without a doubt discover this article accommodating in naming your person. It’s one of the most monotonous positions on the planet yet it’s fun simultaneously. We wish you discover a name to coordinate with your character and affect different players.