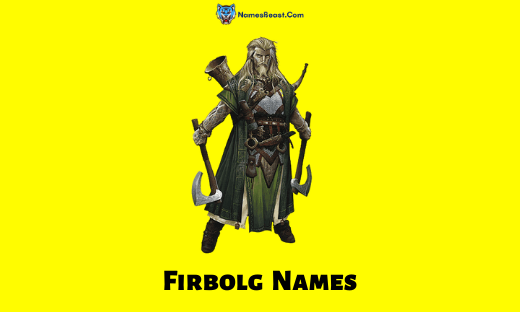 Want to come up with the most appropriate name for your Firbolg? This is the right place for you then. In this article, we will provide you with a step by step guide on what and how to name your Firbolg.

What are Firbolgs? Firbolgs are a race of giant-kin who try to avoid contact with any other sentient race and were both the most intelligent and strong creatures of any race of the giant-kin. They greatly resembled humans who had human-like skin and even though they had different hair being blonde or red-headed was predominant amidst them. Firbolgs are tall creatures. Their average height would be 10 feet in length, and they weighed, depending on their race, anywhere between 500 to 800 kilograms. Firbolgs were strong beastly creatures capable of fighting forest bears barehanded. Apart from having super-physiological strength, they are also known for their magical powers. They were immune to magic and could sense magical auras around them. Firbolgs make for formidable opponents. They have skills that able them both in physical combat and druidic magic. They use large weapons in battles, such as two-handed swords and halberds. Firbolgs are so strong that they can easily wield most human-made weapons in a single hand. They stick together in groups and have excellent throwing strength like giants. They live in family centric clan-based societies

It might seem like a huge task to name your Firbolg. Do not be worried, as in this article, we will take you through a wide option of Firbolgs names that will suit different types of Firbolgs to find the most appropriate name for yourself. At the end we will also have a couple of tips for you so that you can name your Firbolg perfectly.

Tips To Come Up With a Perfect Firbolg Name

Are you still uncertain about your Firbolgs name, worry not? We have you covered just in case? Below, we have noted down a few tips and tricks which will definitely help you to pick the right name for the character.

Here are some tips for naming your Firbolg character:

Try To Represent Your Character By The Name

Get To Know The Gender Of Your Character

The name could represent the characters and what is their speciality if they have any special skills, like being super strong or highly intelligent or if they have any other skills. Before choosing the right one, ask yourself, do they have some other capabilities? This will help you to describe the character more.

Try keeping a name that is relatively less complicated to pronounce. Having a somewhat easier name to remember adds to the character. Even though Firbolg names usually sound a little heavy, you should still try to opt for memorable names. If you settle for names that make your characters have complicated elfish sounding names, as authentic as it might sound, it will be a little hard to remember.

It would serve you well if you try to make your character be memorable. However, you have to settle for names that do not require an eidetic memory to remember. The name of your character would primarily depend on their position in the story, and in some cases, it might be that an extremely unusual hard to remember name might have its place, but a safer bet for most cases would be to keep your character names relatively easier to remember.

Names That Stand Out

Using extremely simple, commonly used names will blend your Firbolg in more with the rest. Even though simple names would stand out, simply does not mean to go generic. If you require your character to stand out, try going for names that stand out. If you need your character to sound unique would depend on what you want for your character. The name should also not match with other characters which are already named.

Try to do your research and be sure to scour places for the names for the one most suited for your Firbolg. You can mix and match a couple of words to come up with unique names as well. Choose the characteristics of your Firbolg properly decide what race it belongs to. If it where is the Firbolg from? All of these factors will have a heavy influence on your Firbolgs name. Most Firbolg names will have a Nordic touch to their pronunciations.

If you found this article helpful, we would be glad if you shared this with your family and peers. We hope that this article attempts to help with your Firbolg naming need and hope our tips have been helpful.