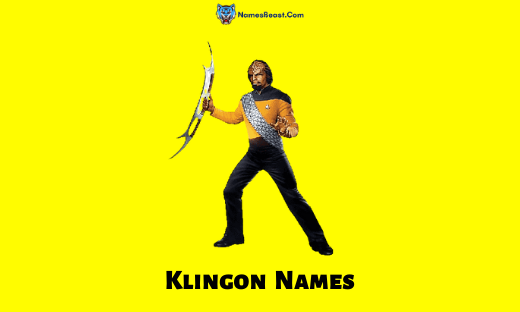 Are you wondering how in the world should you name a Klingon? Well, you do not need to worry when we are here. We understand that it can get a little problematic when someone thinks of creating a name for a Klingon. That is why we brought to you this article. But before taking you to the main attraction of this article, let us give you a basic description of what a Klingon is.

A Klingon was known to be a mighty warrior. He originated from the planet named “Qo’nos”, and they were humanoids in nature.

Now coming to the skills, a Klingon is known to be quite aggressive in nature. They were known to have one of the most powerful military power in the “M” class planet of the Beta quadrant. They were so much powerful that everybody literally respected them out of utmost fear.

It is interesting to note that the first Klingon who was born in the planet was “Kotar” and his mate. They were apparently created by a God of the Beta quadrant. However, as soon as the gods created them, the Klingons destroyed them.

We do not have any such information about the first Klingons ever created. However, we know that around the time of the 9th century, “Kahless The Unforgettable” had created a kingdom for Klingons. In many situations, Klingons were inspired to come under his kingdom with his heroic performance.

Although being humanoid, the Klingons were not in a good relationship with the humans. Proof of it can be seen at the “Broken Bow Incident”, where intense rivalries and terrible fights had arisen between the two parties. Things got so worse between the two races that it eventually led to the battle of “Donatu V” and the “Battle Of The Binary Stars”.

Although they hated the humans, it seems like they were totally devoted to saving their honour and tradition just like the humans. The society of Klingons functioned through family reputation and honour, where tradition was an important part. It has often been said that a Klingon could even give his life to save the tradition of their group. If someone broke the Klingons’ tradition, it was not forgotten easily. There are many punishments that are given to the Klingons who commit offences- the highest of which was to strip the Klingon off his family honour. Through this, we can understand that bloodline and kinship was very important to a Klingon.

Now that you were looking for a spectacular name for a Klingon, you have come to the right place. Allow us to take you to the main attraction of this article- great names for a Klingon. What’s more? We have also created some tips and tricks to come up with the perfect name for a Klingon. Let’s begin!

How To Choose A Klingon Name

Make Names Based On The Klingon’s Characteristics

For a name of any kind of creature, it should always be based on the features and traits which the character has. The same goes when you are choosing a name for a Klingon. You must conduct thorough research based on the specific and notable features that a Klingon has. For example, we have already mentioned to you that a Klingon is highly devoted to their honours and tradition, and it can do anything to save it.

Secondly, Klingons are known to be quite aggressive in nature and they are very powerful indeed.

Thirdly, Klingons have a strong military system. Although it apparently seems like they do not have any such rules from the outside and their military system is more or less like a jungle, it is not so. Maintaining discipline is absolutely mandatory for all those Klingons who are in the military. The military was actually an important part of this society, considering that all those Klingons who belong to the military can save the honour of the clan by fighting in battles.

These were some of the notable characteristics that a Klingon has. We advise you to make a strong and powerful name for a Klingon based on these.

Do Not Give Human Names

Although humanoid in nature, Klingons have an east resemblance to humans. If we note their physical characteristics, they do not resemble a human at all. Their skin colour varies from pink, red or black. Also, they have inhumanly superpowers. We must also mention the fact that Klingons hate humans from the bottom of the heart. Therefore, it would be quite weird and unjustified to give names like John, Samuel, Daniel, Samantha, Elizabeth etc., humanely to these powerful and aggressive Klingons. Right?

That is why always remember to note this very important tip whenever you aim to create a good name for a Klingon. We have already created some great names suitable for a Klingon in the name list above for your easy reference. If you have still not checked it, please do.

Be it any kind of character. Short names are an absolute must. This is because if you create horribly lengthy names, it will not make your character stand out amongst the crowd. The main reason for being so is that super long names are boring and unattractive. Therefore, try to keep the names within three words. That’s it!

For such names, check out the name list above! You won’t be disappointed.

We hope we were successful in helping you create a good name for a Klingon. Now that you have an idea regarding how to create names for a Klingon, get to work.

If we were able to make you happy with this content, please share it with your network. It would help us get motivated.