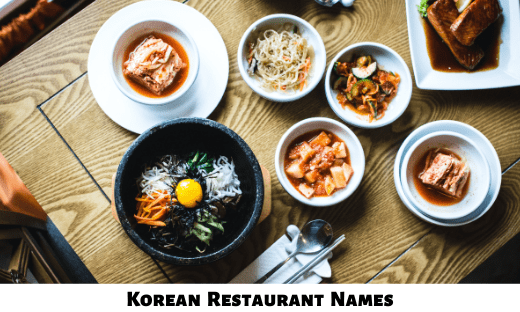 Restaurants of any variety cannot be popular if the food is not tasty. And when it comes to Korean dishes, they are simply chef’s kiss. They are popular amongst people of all ages because they are absolutely delicious, and the flavors are all balanced.

There is simply everything tasty in all Korean dishes. Garlic, pepper powder, soya sauce, sesame oil, black beans- name it, and it is in Korean food. Another essential ingredient that almost all Korean dishes have is sugar. But then again, as we said, the amount is quite balanced. For example, if you take the word called “Kimchi Jjigae” it has a balanced sweet and spicy flavor. The same goes with other popular Korean dishes like Korean Barbecue, Korean Bulgogi, Bibimbap, TTeokbokki, Korean Fried Chicken, etc. Even when we are writing this article, we are actually drooling when we imagine these dishes. This is the magic of Korean foods.

If you think that Korean food was introduced in America in recent times, well, you are wrong. It was back in the 70s or 80s when Korean restaurants first opened in North America. But however, they did not see the colors of success within one day. People were quite unfamiliar with these types of restaurants- most of the recipes were not in English, the dressing style of the food was different, the waiter spoke little to no English. It took a few decades for Korean restaurants to become popular. There are well-noted Korean restaurants everywhere, be it in New York, or Toronto, Los Angeles, or London.

Now that you are willing to open a Korean restaurant by yourself, you have made the right decision. But for any restaurant, it is very important to have a creative, great, and attractive name. This is why we decided to bring you this article. Here, as we mentioned before, you will find a great list of names for a Korean restaurant. What’s more? We have also given you a surprise- tips and tricks with which you can come up with a perfect name for a Korean food business.

How To Name A Korean Restaurant

Come on- you know which band we will talk about right now. BTS! BTS has become impressively popular in recent times. Their hard work is showing off so much, so that reference of BTS is seen everywhere- t-shirts, shoes, school bags and of course in foods! Nowadays, fusion Korean food items are introduced based on the names of BTS members. You can do the same for your own Korean restaurant. For example- you can name your restaurant “What Jimin Loves,” or you can name it “Crazy For V.”

There are billions of BTS fans nowadays. If you take the help of this tip and create a name for your restaurant, the high chances are that BTS fans will be interested in paying a visit to your restaurant. So, as you can understand, your profits will rise. Voila!

Of course, we are not demeaning all the other Korean pop bands that are there out there. If you are a fan of some other K-pop bands like “Blackpink,” you can make names based on it. There is no hard and fast rule.

We don’t know about you, but we simply love Korean movies. We still shiver every time we see “Train To Busan” or the recently released” Squid Game.” And of course, we have to talk about Bong Joon Ho’s “Parasite” or “The Host.” You can actually take references from other notable Korean movies and based on that. You can come up with a creative name for your Korean restaurant. For example, if we take the example of the movie Parasite, we can recreate it as “No Parasite.” Or, if we take the example of the series “Squid Game,” you can name your Korean restaurant “Red Light Green Light.” (this was the first game in the series).

It is absolutely okay if you are not well accustomed to Korean movies. You can either skip this step or research the famous and notable Korean movies on Google. If you go by the second idea, you can also go through our name list again. We have tried our best to include some names for a Korean restaurant based on popular movies.

Make The Name In English

This is why it is always advisable to create a restaurant based on the universal languages in the world. Such as the English language.

But the locality of the restaurant matters as well. If you were planning to establish your restaurant in an area where almost all the people speak in Korean, well, then there’s no problem in making the name in the Korean language.

If you are not accustomed to the English language or if you are someone who is facing problems regarding coming up with names for a Korean restaurant in the English language. Well, you have no need to worry. Try checking out our name list above, where all the names are created in English. We hope you will be satisfied.

We already informed you that there is a high demand for Korean restaurants nowadays in the introduction section. Therefore, the high chances are that you will allot a name that some other business has already taken. Unfortunately, no one can save you from facing legal complications if that happens. Therefore, it is always best to be careful from the first point.

You can check out the name section above. To date, almost all the names are non-plagiarised in nature.

Think about it imagine the customers forgot the name of the Korean restaurant within two minutes of first reading it. Sounds bad, right? All your efforts regarding naming your restaurant will go in vain. If you don’t want that, always create a memorable name for your restaurant.

Now how will you do that? Firstly, make sure that the name is a short and creative one. The name should be within 2 to 3 words. That’s it!

Secondly, make sure that the name it’s not filled with complex words. If it is, customers will face problems regarding pronouncing it.

Following this step might be hectic and time-consuming. We understand that. That is why for your suitability, we have already tried our best to create some names based on this tip. All the names are quite memorable in nature. If you have time, please go through the name list above. Thank us later!

We hope now you will be able to come up with the perfect name for your Korean restaurant. Do not worry. It’s not at all a big deal. You just need a little time and some creativity within you. And that’s it! You can do it.

Did you love this article? If yes, please feel free to share it with your network. Thank you!