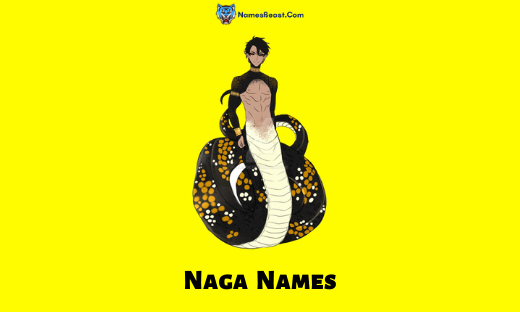 Welcome to this article! Here, we have brought to you an exclusive list containing excellent names for a Naga. Before venturing into it, let us give you a description of what Nagas are.

Nagas are known to be a mixed breed between a human and a cobra. These mythical characters are known to be semi-divine and are very handsome and attractive in nature. They are surprisingly strong, and by certain magical powers, they can either become a whole human being or can attain a whole cobra form. They do not always reside in the land of humans. Rather they have their own luxurious kingdom, which goes by several names such as Naga Lok and Patal Lok. If one goes through the artistic creations of these underground kingdoms, they will find that they are filled with beautiful palaces filled with lots of expensive gems and jewels. Therefore, it is easy to assume that the Naga kings were extremely rich. Maybe that is why Nagas are also known to be the guardians of treasure.

Technically, snakes can be dangerous to anyone. But Nagas are not like that. As per the order of the Brahma, who is known to be the creator of the universe as per the Hindu mythology, Nagas were allowed to bite only the persons who were truly evil or who would face premature death.

All the readers who are accustomed to Hindu mythology, must know about the famous Naga named “Shesha” who serves as Lord Narayana’s bed as he lies on this gigantic Naga.

Or you might have also known about the notable “Samudra Manthan” where a Naga named Vasuki was used by the gods and the demons (who lived in heaven and hell, respectively) as a churning rope to churn out the “Amrita” or the elixir of immortality. Under the Hindu religion, in the month of July to August, the Nag Panchami is celebrated to celebrate the existence of these Nagas.

It is also important to note that the female Naga was deemed to be the epitome of beauty. They were famously known as the “Nagini’s” or the “Naagin.”

Creating a name for such a creature can be a difficult task to do. But there is no need to worry when we are here. As mentioned earlier, this article contains a great list of names for a Naga. Along with that, we have also created some helpful tips with which you can come up with a perfect name for a Naga. With a hiss, let’s begin!

How To Make A Perfect Name For Naga

Make Names Based On “Sss” Sound

If you aim to create a name for a Naga, you should make names containing the letter “S” many times. This is because snakes usually speak with a “sss”, “zzz” or the “hiss” sound. Therefore, putting lots of “S” in the word will match a snake’s characteristics. In order to create this hissing sound, you might also like to put the letter “Z” which performs the same role as the letter “S” does.

If you follow this tip thoroughly and carefully, trust us that he will come up with a perfect name for your Naga. For example, you can create names like- “Sazaphira”, “Zazzemi”, “Drazzania”, “Sassaphira”, “Queen Salanez”. For more such names, we advise you to see the name list given above. But of course, there are some other criteria to look into. Therefore, do not forget to check the tips given below.

Do Not Give Human Names

Although a Naga has characteristics and traits of a human being, such as they mostly look like a human (unless they are in their snake form), or they even walk and talk like a human. But remember that the Naga is a supernatural being and is full of inhuman powers. For example, the Mucalinda (from Buddhist tradition) contains several strong powers. So, he became the protector of the Lord Buddha.

For such a powerful creature, mere human names are an absolute no.

Can’t understand how to utilize this tip fully? Worry not; go through the name list given above. And then, if you want you can even regenerate some names from there. You are welcome!

Because Nagas are mythical creature, modern names would not match with the characteristics of a Naga. Therefore, you should always give a traditional yet bold and classy name to your Naga. But how will you differentiate and understand which name is a modern one and which one is traditional?

Here’s a tip- You can use various Sanskrit words to the name of your Naga. This will give a vibe of traditionality to the name. Plus, along with that, you can also create traditional names based on the traits of a Naga. For example, if your Naga is extremely powerful, you can name it as “Shakti (power) Nag”. This is a traditional name rather than a name like “The Super Naga”. We hope you got it now.

Do Not Give Long Names

Long names are not desirable for a Naga. That is why, whatever name you choose, you must remember the fact that it should be within two or three words (at maximum). Also, make sure that the names are easily pronounceable. For such words, do not forget to read the name list given above.

So, were you able to find out the perfect name for your Naga? If yes, congratulations to you! If not, well not every success comes out from the first attempt. Think with a little bit of creativity, and you can come up with an attractive name.

Liked our article? If yes, please share this with your friends and colleagues. We would appreciate that. Thank you!