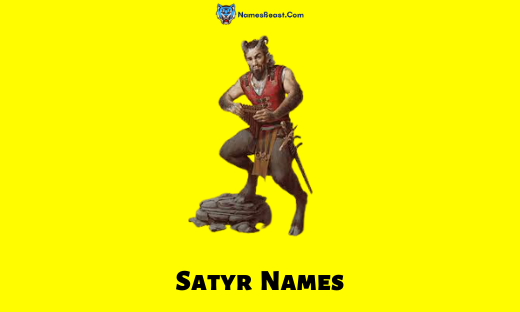 Are you in search of names that are suitable for your satyr character but cannot seem to find one? Do not worry anymore as we here have created this article where we collected all the possible names of a Satyr character. Here we have various names that will appeal to you, so browse the list well and choose the ones you like or even mix-match among them to find your perfect match. Now, before we start the list, it is absolutely necessary to first know a little about the character you are naming. The origin and history behind the character make it easy to find a name that perfectly fits it, not only history but also their appearance, if they are built high or not, the kind of weapons they generally use, and their powers can be useful information as it will help in framing the name according to reference.

Satyr is a very popular character of Greek mythology whose appearance is generally described as that of a horse since they have long pointed ears and a long tail. They are mainly described as a male nature spirit and are also historically known as silenus or silences. Apart from noticeably crooked ears, other facial appearances include mane alike hair, a snub nose, and a beast-like face. They also have legs that look like that of a human and are mainly portrayed as naked creatures. They are associates of the God named Dionysus and are also known to possess a love for wine and arts like music and dance. Satyrs like to live in cold places like mountains, woodlands, or remote locations.

In this article, we have a wide variety of Satyr names to choose from. Here you will find Male Satyr names, Female Satyr names, Cool Satyr names, Interesting Satyr names, and more. Go through them carefully and choose the best one as per your taste. Along with name ideas, we also have various tips and suggestions that may come in handy as your attempt to name your character. Without further ado, let us explore the possibilities.

How To Name Your Satyr Character

It is of utmost importance to know the details of your character before starting the quest of its name. Information like the origin of the character, the abilities and disabilities, its power points, and the first-ever game that started including the character are subject of exploration as you need to understand your character better to pick the perfect name for it.

Here are some tips that might turn out to be helpful in your name choosing process:

Research About The Character

As we have already discussed in the article previously, knowing your character is the first step of the naming procedure. Once you discover its features, appearance, special skills, it will be easier to pick a name that suits the best for your character. For this reason, it is recommended to conduct thorough research on the character with the help of the internet or books, whichever is accessible for you. It will not only help in giving your character an edge but will also help to highlight the powerful features and skills.

Since you will play the character you are naming, it will say a lot about your personality as well in the gaming world. Thus you must be able to relate with the character and its name as well, as if you choose a name that you cannot relate to, it will be hard for other players to understand you as well. In the gaming world, your true identity is your gaming character, and thus, it is a mirror for your personality.

Complicated Names Can Be a Deal Breaker

Everyone wants a unique name for their character, but in search of a cool, unique name, if you choose one which is way too complicated to pronounce or even read, it might be a deal-breaker. People nowadays have a very limited attention span, and if you want to impress someone, you will have to grasp their attention in that very limited span. For that, you will have to choose a name that is easy to understand, as if you choose a name too difficult even to read. People might not want to invest much time just to understand what your name means, let alone partnering up or playing with you.

Pick a Short And Meaningful Name

There are lots and lots of names available in the market which might be suitable for your Satyr character, but which one will suit your personality the best is your call. But whatever it is, it is recommendable to pick a name that has a meaningful impact but is also shorter. The longer the name, the lesser the impact as once your name gets arguably long, it will bore your competitors or other gamers of the industry. People want to play or duel with interesting opponents, and if the character of your name bores players before even joining you in a game, then your reputation as a player might be at stake. You will not be able to showcase your skills or talents as a gamer since no one is interested in joining your game in the first place. This is the reason why it is advisable to choose a name that does not only hold meaning but is also short and cute. Shorter names are more impactful than longer ones, and they even fit the attention span of today’s generation.

Look For Recommendations From Friends Or Colleagues

If you are new to the gaming industry, then do not forget to look for recommendations and feedback. Since you are new, you might not know the type of impact a name holds or the kind of reputation a name is able to create. This is why do look for feedback from people that you know are aware of the new age gaming and even from unknown people.

It is also safer to seek opinions from people you do not know as strangers can provide unbiased feedback. This will not only help you to pick a name that might make a reputation but will also help you in learning how the whole thing works.

With this, we reached the end of this article that we specifically curated for gamer geeks around the world. We understand how important it is for any gamer to choose a name that perfectly describes their character and also portrays their true self in it and how hard it is to figure out that one name. This is why to help you with your burden, we created this article where we have presented all the possible names suitable for your Satyr character.

Finally, thank you for spending your quality time here with us and reading our article till the very end. We hope the article served its purpose and helped you pick the perfect name. If you liked this article, then share it with your close ones. We will see you again next time.