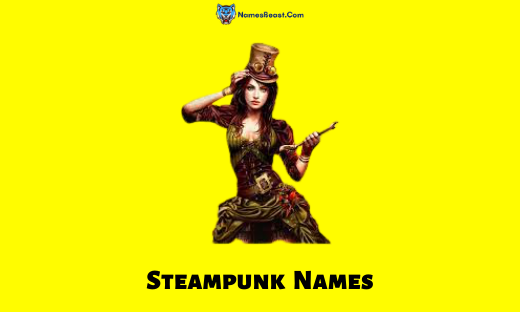 Are you looking for some cool steampunk names? You have visited the right place. Before that, allow us to give you a basic description of what is steampunk.

Steampunk can be defined as a mixture of the past and the future and was inspired by the 19th-century industrial steam-powered machinery. It is science fiction that believes in retro yet futuristic technology.

The main point of steampunk is based on how society would have looked if steam had been the primary source of energy and if the society continued to maintain the Victorian era style (that is, during 1837-1901). Some even say that this aesthetic was also inspired by the Belle Epoque In France (from the year 1871 to the year 1914). Words are also there that it had been inspired by the civil war in the United States of America (from the year 1861 to the year 1865).

Coming to its engineering, steampunk engineering includes the existence of steam-powered machines. For example, it would include airships that would carry flying boats and ships. Steampunk engineering is also known to include various gears or screws, analog clocks, or even rotating propellers. It must be noted that the ingredient of manufacturing these items was always made of solid metal, wood, and sometimes even glass. However, materials like plastics were never used for construction.

Fashion during this time was quite similar to the Victorian era, where clothing such as suits, waistcoats were favourite to the men. While women loved to wear long dresses, brass or copper jewellery. It is important to note here that people belonging to this times loved to wear large goggles. As you can understand, such an attractive style of dressing is favourite for cosplay.

There are a large variety of films which were based on the times of steampunk. Such as the famous movie “Around The World In 80 Days”, “20,000 Leagues Under The Sea”, “Oz The Great And Powerful”, “The Time Machine”, “The City Of Lost Children”, “Miss Peregrine’s Home For Peculiar Children”, “Van Helsing” were quite popular. Other than that, if you are someone who loves anime or manga, you must know that the famous movie of Studio Ghibli named “Howl’s Moving Castle” was based on steampunk.

Steampunk became so popular that in 2005, a lady named Kate Lambert decided to establish the first steampunk clothing company named “Steampunk Couture”. Even luxurious brands such as Versace, Dolce & Gabbana, Prada, and Chanel started introducing the concept of steampunk.

Who haven’t watched the Sherlock Holmes movies? Well, these are other classic examples of steampunk works. Steampunk is so popular now that brands are creating products such as sunglasses, jewelry, and different types of outfits based on the steampunk aesthetic.

As you can understand, to create a name for the steampunk era, you must create something futuristic yet in the retro style. Of course, it is hard. But that is why we have brought to you this article. Read on to find the list of names. Other than that, we have also created some handy tips with which you can come up with a great name based on the steampunk era. With a cup of coffee, let’s go!

How To Choose The Perfect Steampunk Name

Give Names From The Victorian Era

As we have informed you earlier, steampunk is based mainly on Victorian times. Therefore, it would be quite natural if you create steampunk names based on the names allotted to people existing in those days. It is not really hard to do, actually. This is because, if you see our name list, all the names created are very simple in nature.

But one thing that you must keep in note is that not every human name would match with the Victorian timings. Thereby it would not be a good steampunk name. Be careful not to choose modern names like “Olivia,” “Kiara”, “Amy,” or male names like “Theo”, “Tommy”, “Sam”.

But names are not only important. Surnames are important too. And that brings us to our next tip.

If you think that allotting a good humanly name from the Victorian timings will be great for a steampunk name, well you are wrong! Unless you add a proper surname from Victorian times, your name is actually not worth it.

Now how to do it? Well, firstly, you can research what type of surnames existed in those types. You can do so by reading some research articles, journals, books such as “Around The World In 80 Days”, “20 000 Leagues Under The Sea”, “Infernal Devices,” “Boneshaker,” and so on.

Other than that, you can also use steampunk instruments as your surname. For example, a cello is an instrument used in those times. You can use it as a surname. Other such instruments can be the accordion, the bagpipe, or the balalaika.

In the name list given above, we have a good stock of surnames. Do not forget to check them out.

Take Inspiration From Movies Or Books

For books, you can take inspiration from “Against The Day”, written by Thomas Pynchon, “Boneshaker”, written by Cherie Priest.

If you are someone who loves to watch movies or read books, taking help from this tip will be something fun and exciting for you. Thank us later!

The Name Should Be Easily Pronounceable And Memorable

All the tips that we mentioned before will go in vain if you do not follow this last and final tip- to make your name an easily pronounceable and memorable one. No one likes to utter a name that is as hard as a stone, right? Also, we human beings do not have a super memory. That is why it becomes essential to create a name that would be easy to remember.

We understand making such names can be difficult to do. Take inspiration from the name list given above so that you can create ideas and make a name on your own.

Were you able to come up with the perfect name for the Steampunk game that you are about to play? We hope you did. We have tried our best to provide you with an impressive list of names. Other than that, we have exclusively created some tips for your reference.

If you loved this article and found it useful in relation to Steampunk, then please do share it with your fellow steampunk lovers. Thank you!