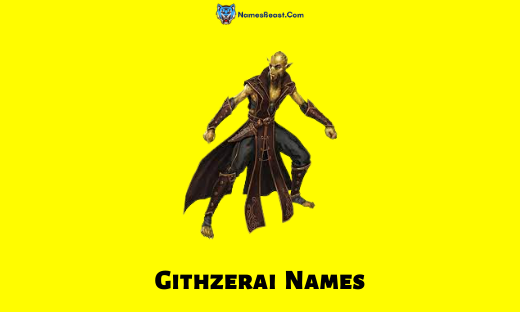 what are githzerai? Githzerai were a race of humanoid that were found dwelling primarily in the plane of limbo. They were descended from a splinter group of gith which are very powerful and strong from the limbs. The giths were a race who were enslaved by mind flayers for years and years until they were desperate for their freedom. The gith were divided into two, militaristic githyanki and the ascetic githzerai. These division was made because of philosophical differences, which led to civil wars filled with blood.

Just like all other giths from the history, githzerais are tall and emaciated looking humans but due to their rigid training they had a more muscular body which helped them to defeat any other creature from that era. The colour of their skin was pale yellow, but in rare cases they had a greenish or brownish tone of skin colour. They had a typical hair colour. Their hair shades were black, russet and grey. The male githzerai had shaved or braided hair. the face hair of the male githzerai was carefully groomed. On the other hand, the female githzerai usually made buns or braids for their hair. The skulls of the githzerai were long in size and angular in shape. They had a deep-set eye with a flattened nose and long pointed ears.

They were trapped in a long time of enslavement and manipulation by the mind flayers as a result that all of the githzerai possessed some psionic abilities. They were capable of many things, such as managing mage hand spells and detecting thoughts and casting shields. They usually favoured practical and unadorned clothing with simple jewellery.

All the githzerai were extremely distrustful of others. They devoted themselves to self-preservation. They were ascetics and philosophers who pursued self-knowledge in the face of adversity. They opposed other races. They always kept the memories of their origins alive in themselves and carried out all their affairs with a rage on anger.

The githzerai followed a life called as a monastic lifestyle in which they tended to train themselves in martial combat and fought like monks, to do this training, they had to access various psionic powers. They had to reproduce effects which were similar to the feather fall, plane shift and see invisibility.

We know that it is a very challenging task to find a perfect githzerai name, but we are helping you by providing some list of githzerai names as well as some tips with the help of which you can make your own githzerai names.

So, without further wasting any time, let’s go through the list of names that we have collected for you.

Tips To Name Your Githzerai Character

Naming is undoubtedly a challenging and time-consuming task, so to make your task a little bit less complicated, we are here at your service. Down below, we have listed some tips that will help you to make your own githzerai name.

So, let’s explore the points that are listed down.

Give Short And Easy Names

One must always go for names that are short and easily memorable. It would help if you always went for short names because short names are always successful. If you go for short names, you will find that people find it easy to recall the name. Going for the big name may result in forgetting the character’s name. If you keep big long names, then you can face trouble. People will tend to fail. Moreover, it might happen that you only forget your character’s name. Forgetting your own character’s name can lead you to embarrassment. So, it is always best to go for names not consisting of more than 7 to 8 alphabets.

One must always stand out from others when it comes to naming. Try to select a name that is not existing from beforehand standing out from others will create your own uniqueness. It can happen you have selected a githzerai name that is already existing from beforehand. In that case, it can happen that people will find it confusing to differentiate that particular character from the other character. People can also think that you are trying to copy the other character and thus can cause a bad impact on you in the market. So, it is always safe to go for uncommon names.

But you have to make sure that when going for some unique name, you are not selecting a very hard name to pronounce and people are spelling it wrong. Then your character can turn into a joke.

It will be absurd if you go for a name that is not only related to githzerai. As we know, githzerai are strong humanoid who holds some magical power within them. They don’t trust other race and are desperate for freedom. In that case, one is required to give a name that will showcase such characteristics. Go for strong, bold names so that people can understand their culture through the names only. If you go for some pale cowardly name, then it will make no sense. Your name must make sense, or else people will find your character boring.

Do Some Research On Githzerai Culture

You should always do some cultural research on the character and go for a name related to that culture or phrase that will represent their culture. You need to do research about their language and their habits. Every tribe has their own famous faces like king, queen or criminals who were famous around the whole world for their acts. Going for those names will be a very nice strategy. You can give names according to their language. Go for historical books where you can find authentic information or surf the internet.

We know how troublesome it is to come up with a name that will serve all your purpose. It can happen you have come up with two names, and now you are finding it difficult to select among those two names. In that case, you can go to the public platform and do voting between those two names. The name which will receive the highest vote can be your final selection, or else you can go to your friend and family who can help you out. You must always be ready to get both positive and negative feedback and make sure to get unbiased. Getting impartial opinion will help you to come up with a good name.

That was all the information we could provide you in today’s article. Githzerai are strong, powerful characters, so it is not easy to come up with their names. To make your job easier, we have provided you with the names above. We hope that you can select a name from among those above lists. With those lists, we have also provided some tips that will help you come up with your own unique name ideas. If you could not find a name till now then don’t lose your hope or don’t tend to give up. Keep your mind calm, take a deep breath and use your creative mind. We are sure that you will come up with a name ultimately.

If you liked this article, do share it with your friends, family, and people you know who are searching for some uncommon githzerai names. We will again meet you soon with some more unique and distinctive article topics. Till then goodbye. Thank You.