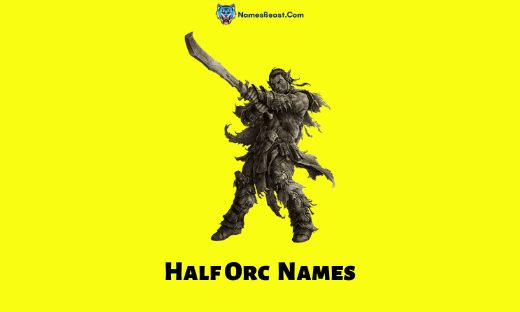 Half-orcs are a species that closely resembles a human and an orc. They are a crossbreed between humans and orcs who share a strong ancestral history when it comes to popular culture and dungeons and dragons. They have both orcish powers which include the strength of a mighty orc and the intelligence and agility of humans. They can be formidable opponents when it comes to battle. Even though shunned and ignored by both orcish and human society, half-orcs have proven themselves from time to time as worthy and dangerous.

As they carry human genes, they are quick to react, are tenacious and bold when it comes to their counterparts. They have the power to adapt to their surrounding in a way that surpasses other races. Considered as outsiders, as they didn’t belong to either orcs or humans their nature of surviving and thriving in uncomfortable situations made them who they are. From the orcish side, they inherited rather less desirable qualities which exponentially added to their disadvantages when it came to the game.

When it comes to abilities half-orcs can see in pitch black situations, have heightened senses. They have a strength that is uncommon in humans though it is quite comparable to orcs. They also have a resilience unique to them and when gravely injured, simply seem all the more determined to win, as though the blows had. These were however temporary like any other mortal they are fatal in battles. Unlike other species, half-orcs lived on the earth for eons yet their existence was somewhat unacceptable to both their ancestors. Pride and Prejudice prevailed at such times and there was nothing but discrimination among the tribes. Thus, the half-orcs developed their own close community and did not allow any other species to enter. They become aware and developed trust issues which later helped them in battles to come. The only downside was that they had become more suspicious of their surroundings killing anyone they don’t trust. Now, this became a problem when the great battle arrived.

How To Pick a Perfect Half Orc Name

If you are still unsure about what to name your half-orc then we have got you covered. It’s amazing how these creatures are social outcasts just as many people in our world. We have a list of ways by which you can name your half-orc to your liking and ace a game of dungeons and dragons.

The very first thing when starting a game of Dungeons and Dragon is to name the characters to your liking. Find a name that suits your personality and fuels your imagination. You need to find your character’s conscience and how it relates to you personally. If you figure that out then automatically a name will pop out. It also depends on the kind of player you are. If you are a pacifist then your name will be according to it.

If your character is a war hero then that should give you a hint about how the name of your character will be. Go around social media to find hints and suggestions from different pages and people who are actually witty and help with the names. Some of the best names come from social media and that’s a fact.

Find a Name That Supports Your Dungeons And Dragons’ Protagonist

You Can Mix And Match Names To Your Liking

In a make-believe game like Dungeons and Dragons, one can come up with any name to their liking. Go to the internet and find names and mix and match them with other characters from other worlds and create a unique and badass name that suits your character. You can take any character from Norse mythology and combine it with someone from Greek mythology like Odda or Offa. You can do whatever you want until it’s just a game. So, go creative and show your peers what you can do with your naming skills.

A Short Name Will Be Easy To Remember And Pronounce

Whatever name you choose, make sure that it is short and compact so that it’s cool and easy to remember. You don’t want your game to be disrupted by a name that nobody can pronounce. You want everyone’s attention and that is fine as long as it doesn’t affect the game. So, show-off but to a limit otherwise you will end up as a laughing stock. A short name also helps with the game as it progresses, storytelling becomes more immersive and the experience is something to remember. So, go find yourself a short and compact name.

Find a Name That Makes An Impact

In a game of Dungeons and Dragons where one needs to make an impact to be relevant, a name that is bold is needed as support. You want your co-players to be impressed and you want to make a bold statement then come up with something that has gravity. Something which has gravity makes an impact on things that are connected to the thing and in this case, it’s the name that should do the trick. A good player should come up with a name that is bold otherwise what’s the point of playing with a half-orc whose name is boring.

We hope that this article is helpful to you in finding a name that really suits your personality and is going to help you in future Dungeons and Dragons games. Naming can be a difficult and tiring process but you should not give up because once you come up with a cool name then you will be able to surpass your peers both in the game and naming process. Just keep researching and looking. You can also find names on social media and ask for suggestions from people as to what your character name should be. Usually, people in social media are able to help and come up with one of the coolest names out of them. So go have fun!