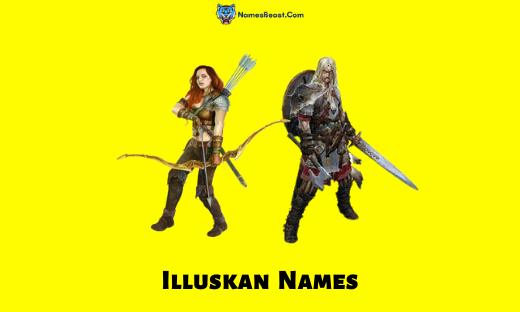 The fantasy world of Dungeons and Dragons is a vast and magnificent one where Illuskans, sometimes known as Northlanders, live along the Sword Coast North, along the Dessarin Valley, on the islands in the Trackless Sea, and among the Uthgardt tribes.

Illuskans are tall, fair-skinned individuals with blue or grey eyes. People who live on the Icewind Dale and Trackless Sea islands have lighter hair, with blonde, red, and brown being the most common. The northern Illuskans with Netherese ancestry are primarily distinctly identifiable for their raven black hair.

Most Illuskans speak Illuskan, a language developed mostly from Old Illuskan with a hint of Netherese thrown in for good measure. They usually speak Common as well, but just a few of them are literate. Many Illuskans speak Chondathan, the language of their Tethyrian neighbours, around the northern shore of the continent, particularly in the city of Waterdeep.

The Illuskans are a rare breed of proud and powerful beings. Much like spartans, their environment has made them hardcore and ready for any difficult situation they are in. They believe they have earned the right to claim the territories they have established via their combat power. Illuskans see most southerners as weak and decadent, virtues they detest. They are, nevertheless, fair-minded and always willing to make exceptions for individuals who have demonstrated otherwise. The Illuskans themselves are brash and impetuous, with a penchant for boasting, consuming copious amounts of mead and ale, and having fast tempers.

If you are beginning your journey on the quest of Dungeons and Dragons and need a perfect character name from the race of Illuskans , fret not anymore, my friend, for we have curated this magnanimous list of Illuskan names just for you.

We’re sure that you will be able to choose the right name for your character. So, let’s have a look:

Tips to Name Your Illuskan

When choosing a name for your Illuskan character, it is mostly advised to do a basic research into the race’s history and culture. Illuskans have no concept of class division among their people, and they have a strong sense of honor and respect in their community. People who are self-sufficient are highly admired. Thus you should keep these essential features in mind while choosing a name for your Illuskan character.

If needed, do conduct a survey as well and take help of people while choosing your characters’ names. If you conduct a survey, you will not only get hold of interesting and useful opinions but also find various other name ideas. It will also help you realize which types of names are famous, which will help you choose the perfect name for your character.

Illuskans are simple people who live the most modest of lives. Thus, the name you pick should complement this essential trait of your race. Simple yet catchy names are easy to remember, and their meanings show the intent behind the creation of the character. A lot of times, in quest of unique names, people tend to pick ones that are really complicated, and others fail to relate to them.

Crucial situations like these are better to avoid as if other people fail to relate or even find your characters’ names complicated. They will not want to learn more about them. This is why it is recommended to select catchy, unique, and easy to remember and understand.

Uniqueness is a virtue; thus, try to keep your name as unique as possible. Try not to use names that are already taken, thus having more than one name in hand in case you need to adhere to plan B.

Sometimes the desired name that you chose for your character already exists and is being used by someone else. In that case, you will have to look for another name as using the one already in business might attract mixed positive and negative reviews as the name already holds a reputation.

For this, if you start going through the same process again, as much as it will be a hassle, it will also consume a good amount of time. This is the reason why it is advisable to keep a list of names as a backup to make sure you can use them when needed without spending time for it.

Your Illuskan name should suggest the best of you so that you can make a mark on the gaming community that will scare each one of your competitors. Kindness and compassion go a long way but never let the world take your politeness for weakness, as the world is harsh, and you need to be agile to understand the reality even in the fantasy world.

Dungeons and Dragons is a game that is played widely across the world, it’s a game that boosts the power of imagination and helps us bond with our friends and other peers.

While you embark on this journey into a world of fantasy and awe, we hope that this list was useful to you in helping you find a perfect name for your Illuskan character. We have had and analyzed several data from across the social media to present before the most unique and ingenious names.

This article was purely for educational purposes, do let us know in the comment section below if we have missed out on any fantastic name. Your time is precious, and that is why we are eternally thankful that you decided to spend it on this article. If this content was valuable to you, spread the good word about us amidst your peers and friends and help us grow. In a world that is so morbid and sad, we try to light up peoples’ minds by enlightening them with the world of fiction.