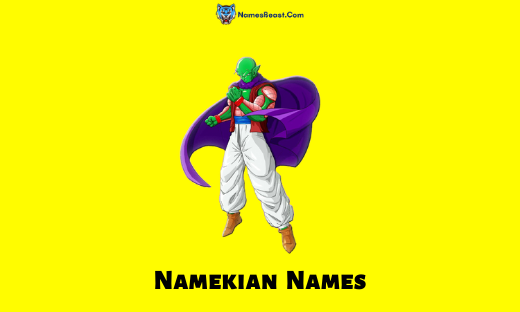 Anyone on this planet has not heard about the Dragon Ball series, the Japanese anime written and created by Akira Toriyama. Namekians are a race of humanoids with green skin and antennae from the planet of Namek. They are an essential part of the series as their race created their own set of dragon balls which, when collected together, would lead to the emergence of a dragon that could potentially grant the collector any wish, even resurrection. Namekians reproduce asexually and have slug-like features. The word ‘Namek’ originates from the Japanese Word ‘Namekuji’, which means “slug” in Japanese, hence the obvious features associated with race.

Piccolo Jr, aka just Piccolo, is one of the famous Namekians of the series, beginning his story as an antagonist being an enemy of Goku in the Dragon Ball saga, but in time, he loses his villainous traits and eventually becomes a mentor to Goku’s son in the Vegeta Saga. This creates a deep emotional bond between the two, and Piccolo ends up being one of the earth’s mightiest heroes.

The Dragon Ball franchise has branched out into the gaming world as early as 2000. However, those were mostly arcade games and didn’t have any RPG elements to them. However, in recent times, especially since 2015 with the release of Dragon Ball Xenoverse, the games have been heavily made for the MMORPG mode. Here we get an opportunity to build our own characters, customize them and eventually gain and unlock more traits to our character by grinding in the game. The grind can be both online PVP fights and offline with the story mode, which is primarily in PVE mode.

In games like Dragon Ball Xenoverse, Dragon Ball Fighter Z, Dragon Ball Z: Kakarot and others, we are faced with an immense issue when it comes to creating our own character, which is the part where we have to name them. We understand that the race of Namekians is the most intriguing one to pick as they are solid and quick on their feet, have enhanced hearing, have the power of rejuvenation and last but not least, they possess the power of telekinesis and telepathy. So here we are presenting you a mammoth list of Namekian names that can help you set up your own gaming character.

Tips For Naming Your Namekian Character

Understand The Super Powers Of Your Character’s Race

Namekians are beings of high potential; they have enhanced hearing capabilities that outdo humans by a margin of 10 times. Added to this, the hardened skin of the Namekian race makes it resistant to heat and signature blade attacks. Though they seem like humans, their lifespan is much longer than us, and they can heal themselves quicker and heal others too and faster than you might think of any injuries. Thus namekians are resourceful, caring individuals with strong determination. If you keep these vices in your head, you can easily think of the perfect name for your character.

Honour Is Essential To The Namekians

While Piccolo is seen to fight Goku with all he has in later parts of the series, we see him have a character arc of his own where he eventually ends up becoming the mentor to Gohan (Goku’s son). We come across a side of his that was not shown before, where he is determined to make Gohan a better warrior, and amidst this, the friendship between him and Goku grows so much that Goku eventually gives his life, defeating Frieza, who ends up destroying the planet Namek. Thus naming your Namkeian character over a treacherous character name would not really do justice to the aura of being a Namekian.

Native Namekians Are Named After Different Japanese Word For “Snail”

While Namekians are later on named after the kind of strength or lineage they belong to, the native ones were named after the Japanese version of the word “snail” as they were based around that creature and had features like green skin and antennae.

Thus while naming them, the character’s name should reflect the ingenuity and creativity to stand out from the rest as Namekians do. There are no rights or wrongs while naming a character, so when it comes to being unsure about the name, just go with your ultra-instincts just how a Namekian would do and trust in yourself while you entrust yourself with a name that you believe does justice to your character.

While naming your Namekian character, remember to forget the name of the characters that you have already seen in the show, for none would want to be in the shadow of another, and thus, your character’s name should be one that has not been used before. Think of Namekian names like that of your email ID; you cannot use what is already taken.

Use Names That Can Be Pronounced

While we understand creativity is essential, we do suggest that you name your character something that you can actually pronounce because if you can, then others can associate that name with yours, and thus this helps in creating a reputation in the competitive gaming market. The world is ruthless, but your name deserves to be at the top.

Dragon Ball series is one of those things from childhood that reminds us of childhood. Thus, while curating this article, we made sure we could reach out to every possibility of creating a list of viable Namekian names to enjoy probably even seek inspiration from it.

Namekians are one of the fascinating creatures in the Dragon Ball multiverse that spreads across games, anime, live-action movies and further novelizations. We understand while picking a name from even the above list is difficult, we hope that at least it would help you brainstorm a new idea from your own. Because when it comes to naming a character, the possibilities are truly limitless, as are you and your imagination.

Fantasy games allow us to use our own creativity. It aids in the development of our beliefs about life, and the perpetual sense of mystery that engulfs it gives us meaning in a bleak and fleeting world. We hope that this article helped you to find the motivation to get out of bed and get into the grind of the gaming world. If the Dragon Ball series was a representation of anything, it would definitely be friendship and hard work. Thus we offer this article with nothing but a token of friendship and a belief that you would help your friend out by spreading the word about us, this article and the hard work we put in to make masterpieces like these happen.