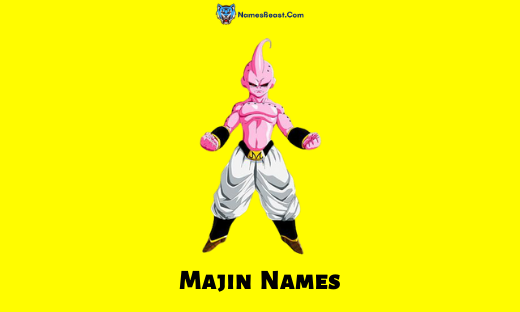 Are you looking for a great name for a Majin? Well, this article shall help you find one. But before that, let us see what exactly Majins are.

If you are a fan of the super famous Japanese anime named Dragon Ball, you must already know what Majins are. They are magical creatures that were a part of the Offworlder race. It is important to note that they were considered to be a part of this race from the Dragon Ball Fusions.

Majins had their first appearance through Majin Buu in the “Djinn Awakens.” If you have already read the manga, you must know that this was the name of the 460th chapter of the Dragon Ball manga series.

In Dragon Ball Z, Majins made their first appearance with the same character named Majin Buu. Here, the episode name was “Buu is hatched,” and the episode number was 232.

By appearance, Majins have pinkish skin, and they are about 5 to 8 feet tall. But, in Dragon Ball Online, we see that Majins can have a variety of colors such as red, yellow, green, or blue. They have a weird head that kind of looks like a soft strawberry serve. Also, they have 2-4 antennas on their heads. Sounds a little hilarious, not gonna lie.

The first member of the Majin race was the same character as you read before-Majin Buu. He is known to have existed for God knows how many years ago. He used to hibernate too long until he was summoned by Bibidi (aka the evil wizard). It is known that this Majin was actually created by the wizard itself. This Majin also comes in three forms, namely Kid Buu, Ultra Buu, and Mr. Buu.

Now coming to the power of this Majin, he can perform several special attacks such as Death Ball or converting to a cannonball, Earth Destroyer, Special Beam Cannon. He can also stretch himself inhumanly and can perform the Super Ghost Kamikaze Attack.

If you wonder whether all the Majins ever shown in the Dragon Ball series are male or not, well. It is not exactly so. It is Dragon Ball Online which became the first media to portray a female Majin. While the female Majins are described as slender beings, all the male Majin’s different incarnations come in a variety. Sometimes, the Majins are frail or fat, and sometimes, they are even tall or muscular. The reason for being so is that Majins are known to be shape changers. This is actually a power as by molding into different shapes, they can effectively dodge attacks. Like the male ones, the female Majins have horn-like antennas on their head.

Now that you are interested in finding a creative and attractive name for a Majin let us take you to the main good stuff of this article. Below you can see a list of names for a Majin. What’s more? We have also created some helpful tips which will help you find a perfect name for a Majin.

3 Essential Tips To Name A Majin

Name A Majin Based On Its Physical Appearances

Not all names are good for everyone. For a character like Majin, who has the powerful ability to change their shapes, the names of such creatures must be based on their power as well. For example, Majins can change their shapes into being frail and slender or tall and muscular. Therefore, you must confirm the physical characteristics that your Majin has, and then on the basis of it, you must create a name.

This tip becomes more essential to note considering the fact that the shape-changing power is one of the most powerful powers of a Majin. For example, if you know about the Evil Buu, he stretches his body way too long, which helps him escape the attacks. Also, Super Buu Can detach his body parts and can mentally control them. So, you see? That’s why this tip is so important.

Names Based On Magical Spells

All the characters associated with Buu have names that are quite similar to each other. Each such names have a magical spell in it. For example, if you consider the three names of “Bibidi”, “Babidi,” and “Buu,” these were taken from Cinderella’s fairy godmother’s song. The name of “Mechikabura” also came from this song.

Therefore, you can create a good name for your Majin based on magical words from Disney songs (or any fairy tale songs in general).

However, considering the fact that such names for a Majin have been created many times, we opted not to create such in the list. If you want to use this tip, you can find a magical word that is unique and non-plagiarised in nature. You don’t have to follow the trend! In order to stand out amongst the crowd, make something unique and creative.

The Name Should Be Easily Pronounceable

No one likes to pronounce a name that is very hard to pronounce, right? That is why, whatever name you choose for your Majin, always remember that the name should be easily pronounceable. But however, making such names is not an easy task to do. But there is no need to worry when we are here. We have tried to create some steps.

One easy step to perform this tip is to make a name that is not too long and does not sound complex. Also, what you can do is, after creating a certain name, utter it loud (at least seven or eight times). Feel that whether the name sounds good or bad when you pronounce it.

If you want to look for more such names, check out the list!

A Majin is such an amazing character in the whole Dragon Ball series. Therefore, for such a character, you must create a great and attractive name. You just need a little bit of creativity, and that’s it! We hope we were successful in helping you how to do so.

We hope you loved this article. If yes, please do not hesitate to share it with your fellow Dragon Ball lovers. Sayonara!